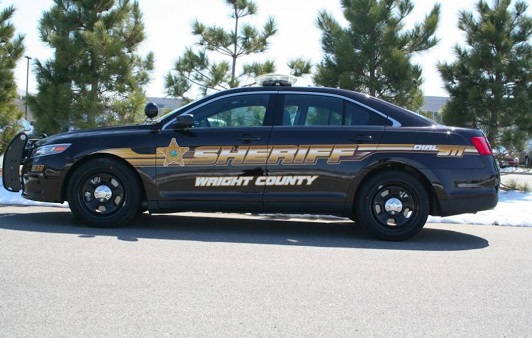 On Monday, deputies from the Wright County Sheriff’s Office were involved in a pursuit with a vehicle that concluded with the apprehension and arrest of a man and woman.
At about 11:45 p.m., a Wright County Deputy observed a passenger car driving slowly through multiple lots of closed businesses in the Clearwater area.

As the marked squad car approached to investigate, the passenger car fled at a high rate of speed. A pursuit was initiated that continued through portions of Stearns County and into the Fairhaven area.

Assisting deputies disabled the suspect vehicle with use of spike strips.

The two suspects fled on foot in the City of South Haven. The male suspect, a 36-year-old from St. Louis Park, stole a separate vehicle and drove into nearby farm fields before crashing on the railroad tracks east of South Haven and was taken into custody.

With the assistance of the Minnesota State Patrol Air Unit the other suspect, an adult female, a 27-year-old from Howard Lake, was located hiding in a wooded area close to where the first vehicle involved in the pursuit had stopped. The female was also taken into custody.

Both are facing possible charges including fleeing police and possession of a controlled substance.

There were no injuries to any of the deputies or to either suspect.