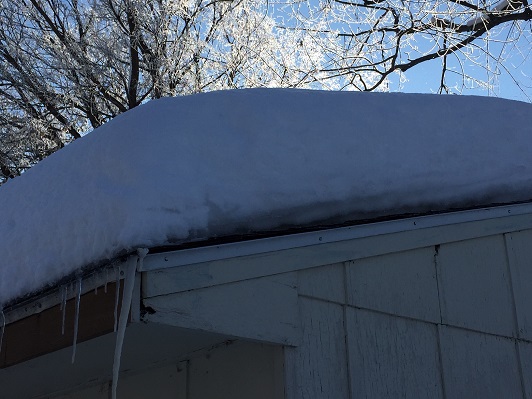 Walz and Sen. Tina Smith met with dairy farmers near Altura in southeastern Minnesota on Saturday. Dozens of barn roofs have collapsed in Minnesota because of heavy snow, with farms in the southeastern part of the state especially hard hit.

Walz calls dairy farms “the bedrock of the economy and their communities.”

Smith says the damage to barns and herds is following low prices for dairy products. She calls it “a double whammy.”

The Post Bulletin report s a bill in the Legislature would help get loans and insurance payments to affected farmers as soon as possible.

But farmer Rob Kreidermacher says he’s not sure how much money his family can afford to borrow.

(Learfield News Service) A roof collapse caused by excessive snow did massive damage to a section of St. Francis De Sal Catholic Church in Moorhead. The collapse was reported just after 12 noon Sunday. Deputy Fire Chief Benton Hicks says it was a miracle no one was hurt.

Church services were canceled due to snow and only two people were in the church at the time. They got out safely. The roof came down on the kitchen area which would have been serving coffee to church members had there been services. Hicks said it could have been a “disaster.”

This was the third roof collapse caused by snow in the Fargo-Moorhead area Sunday.

Early Sunday, a section of flat roof collapsed into the offices at Trail King Industries in the West Fargo’s industries. The pressure from the roof cave-in blew out windows and caused significant damage to the area below. It also sheared a gas line on the roof, sparking a fire that was quickly extinguished.

And later Sunday morning, a portion of roof came down on the auto bay and the entire work area at Matt’s Automotive Service in Moorhead.