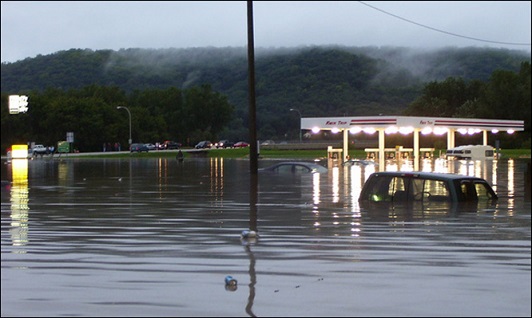 JORDAN, Minn. (AP) — Crews in southern Minnesota are still working with backhoes to break up large ice jams that have forced rivers and streams over their banks.

In Jordan, the level on Sand Creek dropped nearly 3 feet Sunday as workers cleared one blockage, but then another dam formed near a mobile home park where 300 households had evacuated last week. The Star Tribune says about 13 residents remained at a Red Cross shelter Sunday.

An ice jam caused the Cottonwood River in New Ulm to rise about 5 feet by early Sunday.

Some state highways remained closed due to high water, while other roads had standing water but remained open to traffic.

Heavy rainfall and snowmelt have led to dangerously high water in creeks and rivers across several Midwestern states , with the Missouri River hitting record-high levels in many areas.