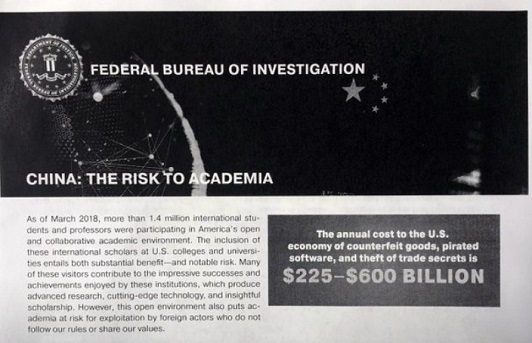 WASHINGTON (AP) — Emails and other documents obtained through public records requests by The Associated Press show the FBI’s far-reaching efforts to caution colleges that some Chinese scientists aspire to steal U.S. research for Beijing’s gain.

The emails show that university administrators routinely have sought briefings from law enforcement officials, even as some schools struggle with balancing the government’s warnings against the institutions’ commitment to inclusive, international academic environments.

The FBI has reached out to colleges and universities across the country as the law enforcement tries to stem what American authorities portray as the wholesale theft of technology and trade secrets by researchers tapped by China.

The emails underscore the extent of U.S. concerns that universities, as recruiters of foreign talent and incubators of cutting-edge research, are particularly vulnerable targets.