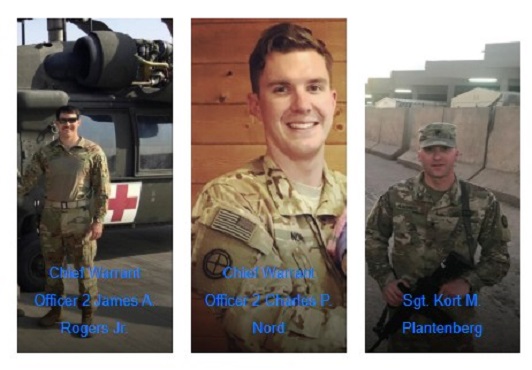 ST. CLOUD, Minn. (AP) — The Minnesota National Guard says the three soldiers who were killed when their helicopter crashed near St. Cloud this week were part of a unit that returned last May from a nine-month deployment to the Middle East.

The Guard on Saturday identified the men killed in Thursday’s crash as Chief Warrant Officers 2nd Class James A. Rogers Jr. of Winsted and Charles P. Nord of Perham, and Sgt. Kort M. Plantenberg of Avon.

They were killed when their Black Hawk crashed in a field about 15 miles southwest of St. Cloud, which is where they had taken off from.

The Guard says the crash happened during a routine maintenance test flight.