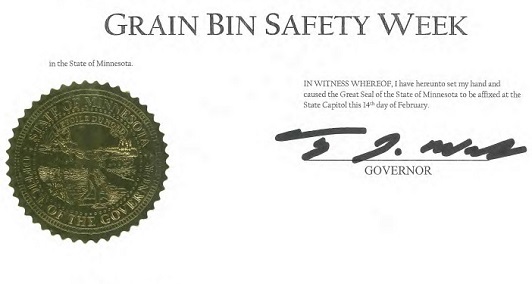 Plato farmer Brian Thalmann, past president of Minnesota Corn Growers Association, predicts more problems in 2020 because farmers were forced to put wetter-than-usual grain in their bins.

Thalmann says, “You put that on top of a farmer who is depressed because of low prices and because of all the other challenges, and they’re probably working too-long hours, they’re tired and so on. So that’s where the education piece I think really comes into play, to keep reminding people not to forget about the safety issues.”

Stu Lourey with Minnesota Farmers Union says there will be lots of talk this session about funding for the Rural Finance Authority. “A lot of those programs go to rebuild on-farm infrastructure. When folks are reinvesting in their equipment, of course they’re using the newest and safest ways of building that for the next generation,” Lourey says.

The Governor has declared this as “Grain Bin Safety Week” in Minnesota.