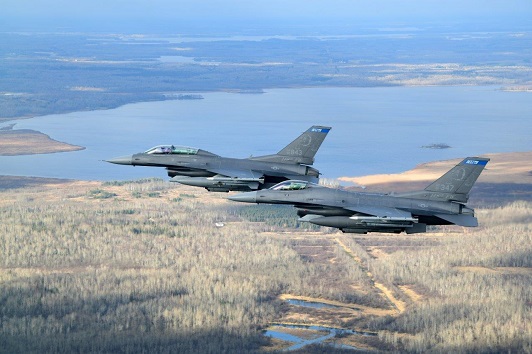 (ST. PAUL, Minn.) – The Minnesota National Guard will be
conducting statewide flyovers in recognition of those on the frontlines of
the COVID-19 pandemic response.
“As part of a nationwide Air Force initiative, the Minnesota Air National
Guard will fly over communities throughout the state,” said Maj. Gen. Jon
Jensen, the Adjutant General of the Minnesota National Guard.  “These
flyovers are our way of showing solidarity for those who have stepped
forward to serve during this pandemic.  This is a small way that we can
salute those at the forefront of the COVID-19 response for their service and
sacrifice.”
The flights scheduled for Wednesday (May, 6) are part of a nationwide effort to
recognize health care workers, emergency responders, food industry and other
essential workers throughout the state that have done their part to keep the
state functioning during the stay at home order.  The aircraft flying these
missions will be combinations of F-16 Fighting Falcon aircraft from the
148th Fighter Wing out of Duluth, and C-130 Hercules aircraft from the 133rd
Air Wing out of Fort Snelling in Saint Paul.
“Our crews must fly regularly to maintain their proficiency,” said Colonel
James Cleet, 133rd Air Wing Commander, “This is an outstanding way to both
train our aircrew and to recognize those in our community that are on the
frontline working hard for the citizens of Minnesota.”
The flight path for Wednesday will reach the following communities:
Brainerd, Coon Rapids, Fridley, Little Falls, Minneapolis, Monticello,
Hastings, Robbinsdale, Rochester, Saint Cloud, Saint Louis Park, Saint Paul,
Stillwater, White Bear Lake, and Woodbury.  Flyovers are set to fly near
local medical facilities in each community. Other sites in the state will be
flown over during future flyovers planned for later in the month.
“Our Guardsmen live and work in these cities.  The Minnesota National Guard
has units and facilities in 58 communities throughout the state.  They have
always supported us, this is a small way we can show that we support them
too,” said Colonel Christopher Blomquist, 148th Fighter Wing Commander,
“thank you for your service.”
These flyovers are incorporated into previously scheduled training missions.
There is potential for the times to flex based on the training missions,
weather and/or airspace availability. A variance of a few minutes either
side of the scheduled time may be unavoidable. If there is a weather delay
or cancellation an update to the advisory will be provided.
All times are subject to change. The flyover will also be visible to areas
surrounding the flight path, we recommend rooftops and open areas adjacent
to buildings for best view.