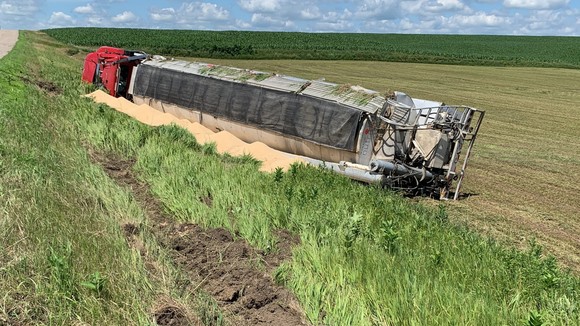 A New Germany man escaped serious injury when his semi-truck overturned into a ditch in Stearns County Tuesday morning (see photos below).

At 11:17 a.m., Stearns County Sheriff’s deputies responded to a crash involving a semi-truck in the ditch at 185th Street and County Road 43 in Eden Lake Township.

The Sheriff’s Office says 37-year-old Brian Luebke of New Germany was westbound on 185th Street driving a semi-truck pulling a feed trailer when he attempted to pull to the side of the road to conduct a walk around vehicle inspection when the rear of the trailer started going into the ditch. He tried to correct the trailer but was unable to. The semi-truck overturned into the ditch and landed on the driver’s side.

Authorities say Luebke was able to get himself out of the vehicle by climbing through the passenger window.

Luebke was wearing his seat belt and sustained a few scrapes on his hands and declined medical treatment.

Andy’s Towing removed the semi-truck and trailer out of the ditch.