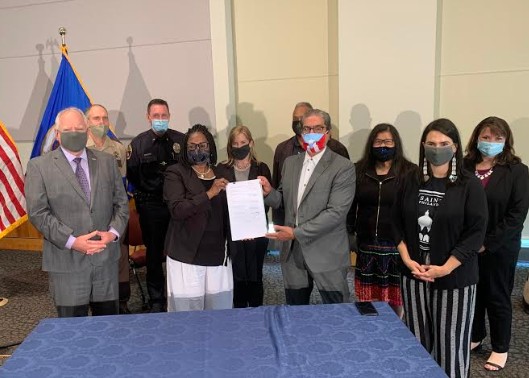 The bill signing follows weeks of advocacy from Minnesotans across the state who have called for reform after the death of George Floyd.

“This bipartisan bill follows decades of advocacy by communities of color,” said Governor Walz. “And it is a good first step. These are long-overdue changes, but they do not end the conversation we’re having about police accountability. The POCI Caucus has shown tremendous leadership on this issue and I look forward to continuing our work with them to bring meaningful reform.”

“I am proud to stand with legislators who have put in hard work and long nights to get this police accountability and reform package across the finish line,” said Lt. Governor Peggy Flanagan. “There is more that we need to do to make sure that Black people, Indigenous people, and people of color feel safe and valued in their communities. This bipartisan bill is the start of building a public safety system that serves and protects all Minnesotans.”

The bill includes a ban on ‘warrior training’ and chokeholds; arbitration reform; requirements for the duty to intercede; mental health and autism training; reforms to the Police Officer Standards and Training (POST) Board; the creation of a new advisory council with citizen voices; and use of force reform.