FARGO, ND (August 2, 2020) – The St. Paul Saints didn’t want to head back to CHS Field for the first time this year on a down note. They got an incredible pitching performance from starter Matt Solter and the bullpen, scored four runs in the 12th and defeated the top team in the league, the Winnipeg Goldeyes, 5-1 in 12 innings on Sunday afternoon at Newman Outdoor Field.

With the game tied at one in the 12th Josh Allen got things started with a one out single to right-center. Alonzo Harris then reached out and blooped a single into right-center sending Allen to third. After an intentional walk to John Silviano, Troy Alexander gave the Saints a 2-1 lead with a single into right. Mikey Reynolds hit a high chopper to third as Darnell Sweeney forced the runner at third, but Sweeney’s throw to first to try and get the double play skipped past Kyle Martin as Harris scored and Alexander took third and Reynolds went to second. Nate Samson sent a fly ball to right-center that hit the glove of Logan hill for a two-run error giving the Saints the four-run lead that they wouldn’t relinquish.

The Saints were up against the Goldeyes lefty Mitchell Lambson, who had his worst professional outing against the Saints back on July 14 when they got to him for 10 runs. He was magnificent on Sunday as the Saints only got to him in the second. Josh Allen led off by drilling a double down the third base line. With two outs Alonzo Harris brought him home with a single to left giving the Saints a 1-0 lead. Lambson went 7.0 innings allowing one run on eight hits and struck out four.

Solter was just as strong as the only mistake he made came in the bottom of the inning when John Nester hit a solo homer to right, his fifth of the season, tying the game at one.

Solter never allowed another runner to reach second as he went 7.0 innings allowing one run on five hits and striking out four.

The Saints will have Monday off and return to CHS Field to begin a six-game homestand that starts with a three-game series against the Fargo-Moorhead RedHawks on Tuesday night at 7:05 p.m. Both teams are TBA. 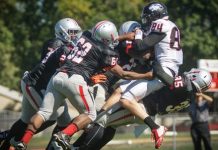