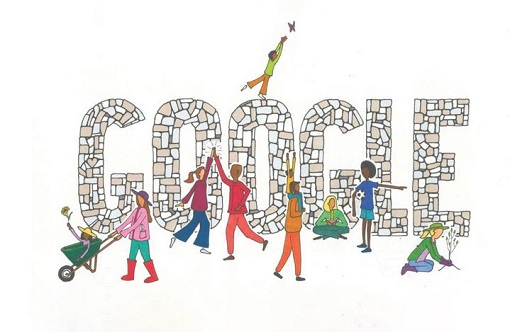 (KWLM/New London MN-) People who use Google know that occasionally they will see clever artwork, known as a Google Doodle, surrounding the logo on their search engine page. Google holds a contest every year for school kids to submit their entries for a Google Doodle, and KWLM reports the Minnesota winner is 13-year-old Henry Vetsch of New London.

…Google had Katie Olson of Paws Floral in Atwater deliver balloons and an I-pad to Henry.

Henry says Google wanted their entries to have a theme of showing kindness, and so he went to work with his alcohol markers…

…Starting this week people can view the winning state entries on Googles Doodle for Google page, doodle4google.com, and vote for their favorites.

There will be prizes for the five finalists, and the grand prize winner will receive a $30,000 college scholarship, and their school receives a $50,000 tech package for a computer lab or tech program.

And of course the winner’s Doodle for Google drawing will appear on Google’s main page.

Henry says he hopes to make a living from his drawing abilities and become an architect some day.