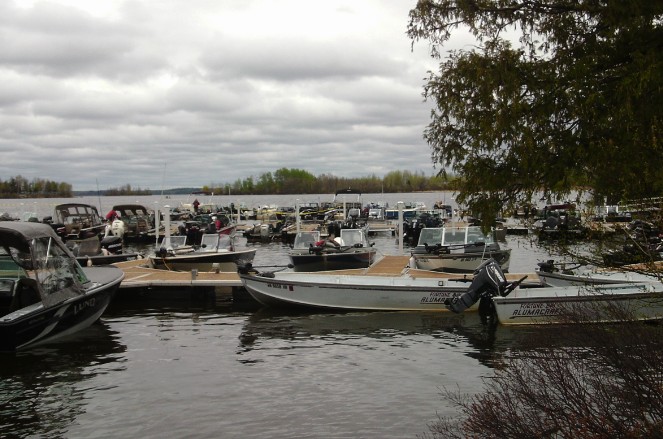 Day 1 saw Schlapper turn in his best performance, a limit of 19-4. He followed with 16-5 on Thursday and sealed the deal with Friday’s catch of 16-15.

Notably, after leading the Day 1 field by 7 ounces, Schlapper increased his margin to 1-2 on Day 2. Friday, his winning margin of 2-13 earned him a first-place prize of $5,000 and a spot in the TNT Fireworks B.A.S.S. Nation Championship, Nov. 11-13 on Pickwick Lake.

“This week was awesome, I’m very thankful,” Schlapper said. “I had a nine-day stretch where (Wisconsin B.A.S.S. Nation teammate) Lonnie (Peterson) and I were practicing and we basically split the lake in half.

“I knew that docks were going to be a big factor, but I also knew that the majority of people would be fishing that. So, Lonnie and I both committed to fishing offshore, and we graphed every day all day.”

Schlapper said he identified a large number of promising spots but found the fish favored different habitat as the tournament progressed. Sunlight had a lot to do with this, as Day 1 brought a mix of sun and clouds, followed by a mostly sunny Day 2 and mostly cloudy skies in the final round.

“By today, I had it narrowed down to just a handful of spots,” Schlapper said. “A lot of the places I thought I was going to get them, I didn’t get them.

“I initially thought I was going to get them in 18 to 20 feet of water — and I did get a few out there. But as the tournament went on, I started to get them shallower, more in that 14-foot range.”

Ultimately, Schlapper attributes his success to extensive pre-event preparation and the discipline to know when he needed to relocate.

“Moving around the lake and not sitting on spots was a big factor,” he said. “I’d pull up and if I didn’t catch one in the first five minutes, I left.

“It took me a lot of time to figure it out, but it saved me a lot of time during the tournament. I could pull and go right to the spot where I felt like, if there was a fish that was ready to eat, I knew where it was going to be.”

For three days, Storms followed the same game plan: Secure a solid limit of smallmouth over a hump in the back of Daisy Bay and then hunt kicker largemouth by flipping Texas-rigged tubes around shallow pencil reeds in Greenwood Bay.

“When you fish for those largemouth, the bites are few and far between, but when you get a bite, it’s usually a good one,” Storms said. “I got to weigh a largemouth over 4 pounds every day of the tournament.

“For my smallmouth, I fished a green pumpkin Get Bit tube on a 1/4-ounce head. For the largemouth, I used a Lake Fork Craw Tube on a 4/0 hook with a 3/16-ounce bullet weight.”

Peterson caught his fish on a drop shot with a 4-inch Roboworm in the Aaron’s Magic color and an undisclosed plastic bait. Peterson described the latter as a power presentation on baitcasting gear.

“I was fishing in 8 to 16 feet of water and looking for anything that was a little bigger than anything else in the area,” Peterson said. “Every morning this week was terrible; I was spinning out really bad until I’d get my first keeper around 10 o’clock each day.”

Dan Parker of Guttenberg, Iowa, won the Big Bass award with his 4-14.

Dan O’Keefe of Prior Lake, Minn., won the Big Bass award among nonboaters with a 5-5.

The event was hosted by the Fortune Bay Resort Casino.