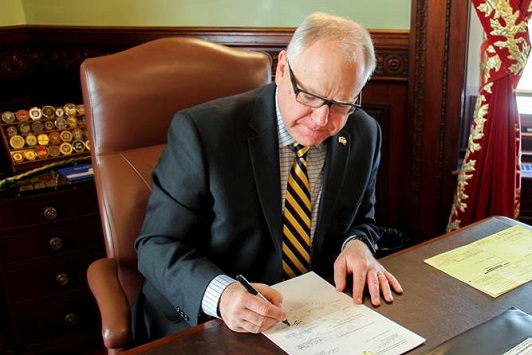 “When the unexpected happens, we come together as One Minnesota to support our neighbors,” said Governor Walz. “We will work closely with these counties to ensure they have the resources and support they need to recover in the wake of these floods.”

The excessive moisture caused significant damage to roadways, culverts, earthen berms, and drainage systems. In Morrison County, the city of Little Falls received over nine inches of rain in a short period of time. Among the major impacts from this storm were major shoreline erosion and damage to the Mississippi River banks at the Charles Lindbergh House and Museum Historic Site, which is listed in the National Register of Historic Places. The Morrison County Historical Society building also sustained flood damage.

The State Disaster Assistance Contingency Account will cover 75 percent of eligible costs, or over $1.4 million for all five counties. The individual counties are responsible for the remaining 25 percent.

The Department of Public Safety division of Homeland Security and Emergency Management will work with Kittson, Le Sueur, Morrison, Renville, and Washington County officials to provide assistance as directed by the Governor.